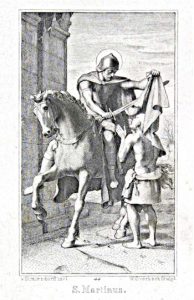 Why did the 1918 Armistice take effect on November 11?
Negotiating and drafting the Armistice took well over a month. So what made them decide to let it take effect on 11/11? This day is dedicated to Saint Martin, the patron saint of soldiers. Saint Martin was famous for using his sword for charity. Martin was a soldier in the army of the Roman Empire and he was stationed in Gaul (modern-day France). One day he was approaching the gates of the city of Amiens, where he met a scantily clad beggar. He impulsively cut his military cloak in half to share with the man.
– A great way to commemorate Veterans Day is to promote charity!

So, Veterans Day is a day that remembers peace-making and charitable giving. In 2018 Veterans happens to fall on a Sunday. That will be a special weekend at St. John’s UCC. On Saturday, November 10th, 2018, Young and Old with self-made paper lanterns will follow Saint Martin on his horse through the neighborhood around St. John’s United Church of Christ. It all starts with the making of the paper lanterns at 6:00 pm. On Sunday, November 11th, at 10 am, the Rev. Mirjam Haas-Melchior will lead the worship service at St. John’s UCC where pictures of our veterans will be prominently displayed. I will be bringing my presentation on suicide prevention to St. Paul’s Presbyterian Church in Needville that Sunday. So much is heard of veteran suicide, but it is really an epidemic that affects all our communities – including churches.
– Save a life, help a poor beggar, promote peace!