They were not just eleven Jews. The worshipers killed in Pittsburgh were persons:
Joyce Feinberg, 75
Richard Gottfried, 65
Rose Mallinger, 97
Jerry Rabinowitz, 66
Cecil Rosenthal, 59
David Rosenthal, 54
Bernice Simon, 84
Sylvan Simon, 86
Daniel Stein, 71
Melvin Wax, 88
Irving Younger, 69
I heard their names read out loud at a vigil at the Evelyn Rubenstein Jewish Community Center of Houston. I had been choking and fighting my tears all through the vigil because the moment we arrived a lady walked up to us, recognizing us as Christian clergy and she opened her heart, “Thank you for coming. I am sorry. I am so sorry because I am so angry. My parents fled from South Africa to the Congo and eventually to America. We thought Jews were safe here. Here in this country. I am so angry”. Her tears became my tears. 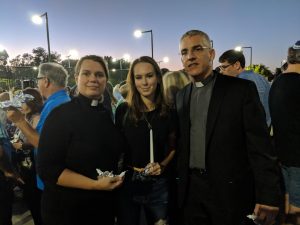 We gathered with well over 1,000 people – Jews, Christians, and Muslims and we sang, “Hinneh mah Tov umah naʿiym sheveth aḥiym gam yaḥadh”, the first verse of Psalm 133, “How very good and pleasant it is when kindred live together in unity.” All the speakers stressed our unity against hate and violence, the Muslim representative being the most powerful, “the entire Muslim community stands with our Jewish brothers and sisters.” Let that sink in! That’s how peace-making works!

Mayor Sylvester Turner had a sobering thought, “It will happen again.” And he is right. That’s why vigils matter. Because we have to stay vigilant! We have to stay awake and alert! Wherever hate speech gets normalized, wherever one group is pitted against any other, people of faith need to find the strength to stand up for love. If you weren’t there on Sunday, do not dismay. There is another vigil on Thursday, November 1st at 7pm. And it’s even closer to home at Congregation Beth El, 3900 Raoul Wallenberg Ln, Missouri City, Texas 77459. Come out and stay vigilant!