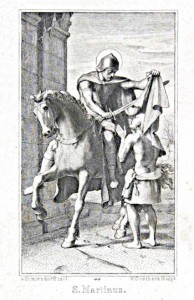 Veterans Day
As a United States Army Chaplain this Veterans Day I celebrate all my brothers and sisters in the service, past, present and future. As a Christian Minister I also recognize November 11 to be Saint Martin’s Day. But then again, these two commemorations are really one: Saint Martin is the Patron Saint of Soldiers after all and the US Military Academy at West Point has a St. Martin Chapel for a reason.

Saint Martin’s Day
Martin of Tours was a soldier in the Army of the Roman Empire. One day as he was approaching the gates of the city of Amiens (modern-day France), he met a scantily clad beggar. He impulsively cut his military cloak in half to share with the man. Eventually Martin became a Saint and his cloak has been venerated as a relic in the Roman Catholic tradition. The priest who cared for the cloak in its reliquary was called a cappellanu, and ultimately all priests who served the military were called cappellani. The French translation is chapelains, from which the English word chaplain is derived.

Professional Chaplaincy
Even though this is a reflection for Veterans Day and Saint Martin’s Day really what pulls it together is the Chaplaincy. The bearers of Martin’s cloak are no longer limited to the Armed Forces but you can find spiritual caregivers in Healthcare, Law Enforcement, Congress, Prison and even the Corporate Sector.

Serving all God’s Children
As I honor our Soldiers, Sailors, Airwomen, Airmen and Marines today I am reminded that they all serve all Americans. And I mean literally all the great diversity of people in the United States. The same is true inside the service where Department of Defense Directive 1020.02E states: “All Service members are afforded equal opportunity in an environment free from harassment and unlawful discrimination on the basis of race, color, national origin, religion, sex, or sexual orientation.”

Saint Martin did not care who the beggar was or where he was on life’s journey.
Martin shared his cloak with this child of God.