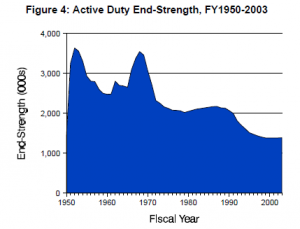 Veterans Day events are growing fewer and smaller every year. Those who show up are more faithful and committed than ever. Veterans organizations like the Veterans of Foreign Wars (VFW) and the American Legion are scrambling to keep local chapters operational. As a pastor I enjoy having military honors at the funeral of a veteran but in our community the American Legion cannot even get enough people together for a 21 gun salute. This is a problem because more often than not this time-honored tradition will just have to be skipped.

The decline in veteran culture and organization has one simple reason: The size of the American military has been shrinking for decades. The total number of service members is only half of what it used to be through the 50s, 60s and 70s. From over 3 million we are now down to 1.3 million people on active duty. That is a good thing. We do no longer have wars that are a clashing of the masses, killing tens of thousands in one battle field. We utilize more technology and that means we put fewer bodies in harm’s way. We are keeping American lives safe and fewer families are affected by the horrors of war.

But under the condition of the fallen world that number will never reach zero: “But if you do what is wrong, you should be afraid, for the authority does not bear the sword in vain!” (Romans 13:4) And that means that brave men an women will have to pick it up for all of us. We only want to send as many to war as we need to but when they come back we pledge our sacred honor to them as they pledged their lives to us. That gets harder the fewer there are. So the decline in veteran culture and organization is both to be mourned and celebrated at the same time.