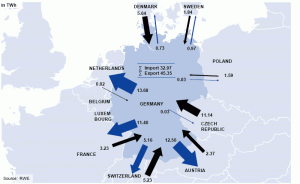 Ever since our local newspaper reported Germany decides to abandon nuclear power by 2022 people keep asking me about my take on this.
Let recent history teach us a lesson here: Panicking after the Japanese earthquake Chancellor Angela Merkel closed the seven oldest of Germany’s 17 nuclear power stations pending a three-month safety review of all the reactors. How could Germany do that? – By importing more nuclear power from France and the Czech Republic.
Germany’s decision not to produce nuclear power anymore does not mean they don’t want to use it anymore. Czech reactors are more affordable anyway since they don’t have all those strict safety standards that Germany imposes on itself. About a third of Germany’s nuclear imports in 2007 came from the Czech Republic. This number is expected to double.