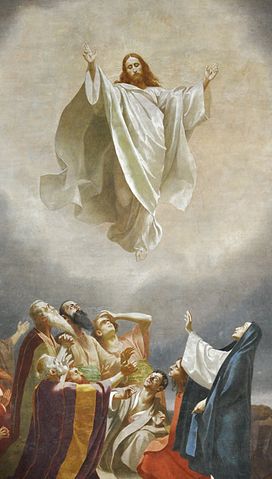 Today is a Ascension Day. Most of the time, churches will push the observance to the following Sunday, so more people have a chance to attend. Why should Ascension Day matter to you?

1. If you have a German background you would be pleased to learn that Ascension Day doubles as Father’s Day. Also it comes as a national holiday that is traditionally celebrated with lots of day-drinking.

2. The theological message of Ascension Day is that the resurrected Jesus went back to heaven. On a practically level that means that Jesus is not here! There is Good News in the fact that the church cannot engage in a Führer cult following a person here on Earth.

This week will you find a church that celebrates this important holiday?


While Houston was enjoying 80°F last week, I landed in Germany, to a freezing 32°F. A couple of days later I woke up to snow on my parents’ balcony. On my week-long trip I had the chance to celebrate two family birthdays and reconnect with old friends. I’ll be honest: It wasn’t exactly a vacation because I went from one event straight into the next and that usually after very short nights. But it was all worth it, because it allowed me to make and maintain connections that matter in my life.

Many Texas families trace their pedigree back to one German root or another. Most of them not as recent as mine but still: There is a vibrant and relevant connection. And since 2017 marks the 500th anniversary of the Protestant Reformation, I encourage you to give Germany a chance. Our friends at St. Paul’s Lutheran Church in Columbus are hosting a tour to Germany and Switzerland, July 10-20, 2017. The tour is going to hit all the important sites of Reformation history as well as some of Germany’s greatest tourist attractions. They have a few seats left. Please pick up your brochure at our church office.

If you cannot see yourself making this transatlantic trip this summer, maybe you’d enjoy that we are bringing Germany to Rosenberg. The German Institute for the Southwest is now registering for German classes for all ages at St. Johns’ United Church of Christ in Rosenberg. We will have a 10 Week Spring Course for Adults from March 18 to May 27, 2017 and a 10 Week Spring Camp for Children and Teenagers from March 11 to May 27, 2017. Classes are held on Saturdays from 9:00 a.m. – 12:00 p.m. except for March 15 (Easter Saturday). For all the details and registration please visit the Institute’s website.

Finally there is another way we stay in touch with our German roots: Friends of St. John’s wanted to have their high school daughter experience a semester at a German high school. On the other side I had a fellow minister in Germany ask on behalf of a colleague’s daughter if she could find a guest family over here for a year of high school. This summer it is going to happen: the families have made their arrangements, paper work is in the process and soon we will have established another beautiful transatlantic connection. This is your church at work: mindful of its roots connecting into the future. 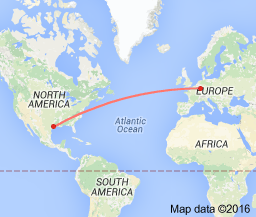 Church is not just the particular group of people you meet with in a particular building on a particular day for a particular program. The church as the body of Christ is so much bigger than that. Here is a story that recently happened at St. John’s United Church of Christ in Rosenberg, Texas.

One of our members works as a preschool teacher. She feels that the public school system would be a better fit for her skill set. So she digs up her almost 10-year-old education credentials. Now she needs to have her school submit them officially for the credentialing process for teachers in Texas. That should not be too hard from here, right? Well, there are a couple of twists in her journey that complicate the matter:
1. The school was closed down a few years after she graduated there.
2. The school was located in Boppard, Germany, 5,214 miles away from Rosenberg, Texas.

How do you get a school that no longer exists half way around the world to send a certificate on your behalf? – That’s where the Wider Church comes in!

As a United Church of Christ congregation we are in full church communion with the Union of Evangelical Churches in Germany. One of their denominational bodies sponsored the school in question. The Diakonische Werk Rheinland-Westfalen-Lippe still keeps the archive of the long closed Janusz-Borczak-Schule Boppard. Since their pastor for public relations has been a long-time acquaintance of mine it was easy to explore options. And indeed, my friend Ulrich Christenn was able to climb into the basement of the administrative offices in Düsseldorf and locate her diploma.

The lesson learned here is:
The larger the body of Christ is, the smaller the world becomes!
It is crucial for the church to work together in all its structural forms on all levels.
It literally pays off to be involved in the wider church, not just your local congregation.

With our St. Martin’s Day Celebration fast approaching it is time to get your supplies ready to build your lanterns. We will gather on November 12th at 5pm to build them. Then it’s stew supper at 6:30 followed by a skit and finally our lantern procession. Please RSVP on Facebook.

The most common one is based on a box of Brie cheese. Detailed instructions are over at UK-German Connection.

Another easy way is to use a two-liter soda bottle or a milk jug as your body. Since it’s transparent to light all it needs is stickers as decoration or like this found on Pinterest.

A word on lighting: We will have several pre-lit handles available. But please plan to bring electric tealights or glow-sticks in case we run out.

A great source for more lantern patterns and craft suggestions is Heiliger-Martin.de It has instructions with images so don’t let the German language deter you.

I am fixin’ to attend the United Church of Christ General Synod 2015 in Cleveland, Ohio, June 26-30. Every two years delegates and visitors from all over the country convene for the business and celebration of our wider church family. A reunion of sorts representing 1,000,000 people. Like many attendees I will post regular updates using the hashtag #GS2015. Back in Germany the national setting of the church has a similar event that just concluded a couple of weeks ago. Here is a report that has been shared via the World Council of Churches:

Tens of thousands of people from Germany and beyond have converged on the city of Stuttgart for a five-day festival of faith, debates, music, worship and culture. Open-air services in different parts of the city marked the start of the German Protestant Kirchentag, or church convention, which began on 3 June and continues until 7 June.

The event is Germany’s biggest Protestant gathering, taking place every two years in a different German city. It brings together tens of thousands of participants, including personalities from political, economic and national life. The Kirchentag was founded in 1949 by Protestant lay people to strengthen democratic culture after the Nazi dictatorship and the Second World War. The Kirchentag also serves as a major forum for debates on such matters as nuclear power, climate change, and the financial crisis. Alongside such discussions, it offers opportunities for worship, music and culture. The event features 2500 individual events in Stuttgart.

Speaking at the opening ceremony, German President Joachim Gauck underlined the role of the Kirchentag in motivating people to tackle the major issues of the time. “Poverty, injustice, lack of peace, intolerance and environmental degradation affect people in many parts of the world,” said Gauck. “Those who live by faith do not want only to be spectators in the face of such developments. They are looking for responses that will help them to act.” Gauck was a Protestant pastor in the former East Germany and became active in the 1989 protests against communist rule that led to the unification of Germany the following year. Alongside Gauck, Chancellor Angela Merkel and former United Nations Secretary-General Kofi Annan are scheduled to address the gathering.

Almost 100,000 people are registered for the whole of the five-day meeting. The assembly takes place this year under the biblical theme “That we may become wise,” based on a verse from the book of Psalms (90:12). The president of the 2015 Kirchentag, Andreas Barner, underlined the need for wisdom in “how we deal with each other, how we deal with our natural resources, and with our world.” At the same time, he said, “The sustainability of our society depends on the extent to which we develop the ability to create and to preserve peace.” Barner, a Protestant layperson and business leader, referred in particular to the continuing reports of people drowning in the Mediterranean as they try to reach Europe from North Africa. Such deaths must come to an immediate end, he said.

The Kirchentag has strong ecumenical links in Germany and beyond, with more than 5000 international guests at the Stuttgart meeting. They include a high-level delegation from Korea and large groups of participants from Indonesia and Nigeria. On 6 June, the general secretary of the World Council of Churches, the Rev. Dr Olav Fykse Tveit, will take part in a day of events linked to the Pilgrimage of Justice and Peace, launched by the WCC following its 2013 assembly.