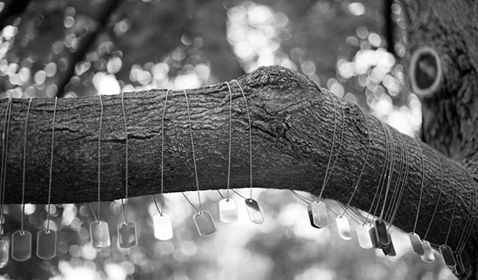 Why did the 1918 Armistice take effect on November 11?
Negotiating and drafting the Armistice took well over a month. So what made them decide to let it take effect on 11/11? This day is dedicated to Saint Martin, the patron saint of soldiers. Saint Martin was famous for using his sword for charity. Martin was a soldier in the army of the Roman Empire and he was stationed in Gaul (modern-day France). One day he was approaching the gates of the city of Amiens, where he met a scantily clad beggar. He impulsively cut his military cloak in half to share with the man.
– A great way to commemorate Veterans Day is to promote charity!

Why should the church care about November 11?
The remainder of Martin’s cloak eventually turned into a relic venerated by the Catholic Church. The priest who cared for the cloak in its reliquary was called a cappellanu, and ultimately all priests who served the military were called cappellani. The French translation is chapelains, from which the English word chaplain is derived. Nowadays a chaplain is an individual who is ordained or endorsed by a faith group to provide chaplaincy care in diverse settings including, but not limited to, hospitals, corrections, long-term care, sports teams, palliative care, military, hospices, workplaces, mental health and universities.
– A great way to commemorate Veterans Day is to promote spirituality!