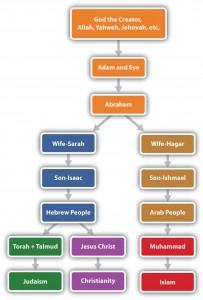 “Father Abraham had many sons. Many sons had Father Abraham. I am one of them and so are you.” Are you humming along yet? Right arm, left foot…
This is not only a nice little children’s church song but also a very profound truth that speaks to three major religious events that are all happening today:
1. Pope Francis arrives for his first visit to the US.
2. The Hadjj attracts millions of pilgrims to Mecca.
3. Yom Kippur reminds Jews around the world of God’s forgiving grace.

Why should I as a Protestant care about the Pope?
The Bishop of Rome is a fellow Christian! All our denominational split identities mask the truth that there is only the one holy, catholic church. Now in Rome they think they perfectly embody it like nobody else. And as Protestants we cannot recognize that. But the way the Roman Catholic Church symbolizes and lives unity of a global Christian community is a beautiful witness in the body of Christ. As a Protestant I care for the witness of our Catholic brothers and sisters because we are called to work together toward unity in the body of Christ. We share a common Baptism and we are sent by one Lord to serve all God’s children. We are called to work together and be one.

Why should I as a Protestant care about the Hajj?
Pilgrimages are one of the oldest and most profound spiritual exercises there are. The once-in-a-lifetime journey to Mecca is a beautiful symbol of people putting a lot of effort into their faith life. Jihad means making effort for God. As Protestants we talk about free grace all the time and that is true. But the huge amounts of time, money and effort every able-bodied Muslim is supposed to invest in this journey is a powerful expression of dedication. Like our Muslim brothers and sisters we are called to make an effort for our spiritual well-being.

Why should I as a Protestant care about Yom Kippur?
The Jewish Day of Atonement has a clear message: People can change. Yom Kippur symbolizes getting rid of our sins and starting afresh. A new start with a clean slate. Our trespasses are forgiven. You think the Reformation invented that? Think again! The power of God’s forgiveness has always been important to God’s people. When we are reminded that God forgives, then we are free to forgive ourselves and others. The blame game ends: I am okay. You are okay. God loves you. I love you. We can all change for the better. And we will be in need of change again next year for Yom Kippur.

Father Abraham has many sons. Many sons has Father Abraham. The three most important sons of Abraham that we need to understand as siblings in faith are Jacob, Isaac and Ishmael. As Christians we subscribe to the lineage of Isaac. Abraham was almost prepared to give his son’s life to honor God. Ultimately the early church saw Jesus’ death as a reflection of Isaac’s sacrifice. As sons and daughters of Isaac it does not matter whether you are the Bishop of Rome or just a regular Joe. As Christians we are all children of Isaac. The Jewish people are descendants of Israel which is another for name Jacob. And Jacob is Isaac’s son. Families are complex: Abraham had another son: Ishmael and eventually Islam develops in his lineage. As Jews, Christians and Muslims not only do we all serve the same God but we are also part of the same family. And when family members have special days you celebrate with them.