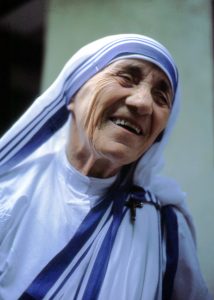 Mother Teresa has always been a saint, that is in the public opinion. Her selfless service to the least of these has inspired generations. The world officially granted her the status of a “civil saint” when she received the Nobel Peace Prize in 1979. It does not get better than that. In the truest, most literal church-sense of the word, as Protestants, we would have to say she received her saint status at Baptism. That was the day after she was born. She had not helped anyone then. Sainthood is not something we can earn but a gift from God. Saints are those called by God to be God’s people.

Imagine the world had no images of her with suffering little children. What remains of Mother Teresa, when you take away the millions of dollars raised over the course of her career? What if her wealthy father had not died when she was only eight years old? She may have stayed in her native Balkan region, never even making a trip to India. But he did, and she did, and that changed the world. Mother Teresa has been celebrated – maybe even venerated – by people of all faiths or no faith at all. She served as a perfect example of faith bearing fruit.

But then she also ran an international organization – Missionaries of Charity – with various clinics, hospitals and hospices. As of 2012 more than 4,500 nuns worked in 133 countries supporting 710 facilities. The moment you get involved in an organization of that size you lose the innocence of just gathering a handful of faithful around you. Every saint is always also a sinner. Mother Teresa is no different. There has been constant criticism of sanitary conditions and religious practices. Where two or three are gathered in Christ’s name they are bound to mess up. That is the risk you have to take whenever you do something significant or holy.

So last Sunday it happened that the Bishop of Rome agreed with the world and finally called Teresa a Saint, almost 20 years after her death. There is a lesson to be learned from that process: Do not wait to understand yourself as a saint. You are a saint right now. You can go out and do good right now. You do not need to wait for any authority’s approval or recognition. You may just gather a few people and do a one time project, or you may establish a world-wide network impacting millions. Whatever you do: Do not delay and do not wait for the approval of some perceived authority. You will mess up. You will be criticized. You will be a sinner. That is what being a saint is all about.