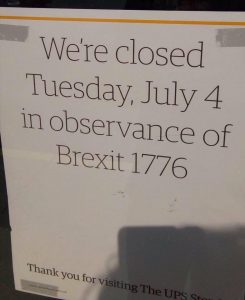 #Brexit1776
Well-meaning, patriotic, happy American friends share this meme a lot these days. There are indeed a couple of things that the American Declaration of Independence and the British vote to leave the European Union have in common:

1. People want to rid themselves of perceived oppression.
In 1776 the thirteen colonies made their case against King George: “He has abdicated Government here, by declaring us out of his Protection and waging War against us. He has plundered our seas, ravaged our Coasts, burnt our towns, and destroyed the lives of our people. He is at this time transporting large Armies of foreign Mercenaries to compleat the works of death, desolation and tyranny, already begun with circumstances of Cruelty & perfidy scarcely paralleled in the most barbarous ages, and totally unworthy the Head of a civilized nation.”
In 2016 the British electorate did not really know why they did not want to be part of the European Union anymore. As a matter of fact it wasn’t until after the vote that Brits started googling “What Is The EU?”.

2. People are concerned about the status of migrants
In 1776 the biggest concern for America was and ought to be: How can we get the most people here and make them citizens as quickly and as smoothly as possible? The king of England is hurting us by putting up a fence around our borders: “He has endeavoured to prevent the population of these States; for that purpose obstructing the Laws for Naturalization of Foreigners; refusing to pass others to encourage their migrations hither, and raising the conditions of new Appropriations of Lands.”
In 2016 the overall British sentiment was: “We don’t want no refugees!”

If you have to parallel the Brexit of 2016 to an event in American history, I propose 1620. The pilgrims were one group of migrants who formed what later became the United Church of Christ. They declared their #Brexit1620 by leaving Britain and finding a new home in America.
In 2017 the United Church of Christ declared itself an Immigrant Welcoming Church. At #UCCGS the pilgrims’ sons and daughters remember what it means to be a refugee.
July 4th is not a Brexit but opening your welcoming arms to those oppressed by ruthless empires: “Come to me, all you that are weary and are carrying heavy burdens, and I will give you rest.” (Matthew 11:28)