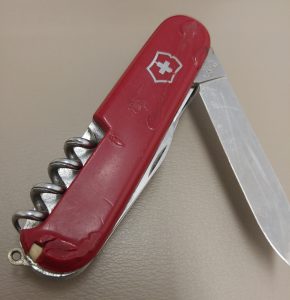 This is my Swiss Army Knife. There are many like it but this is mine. It says Porsche on one side because the car dealership my dad used to work for sold cars of that make. Also it has a bad dent in it so I can’t get the toothpick out anymore. I have had it for most of my life and that’s what happens. Along life’s journey we get dinged and bruised and move on regardless. This is my Swiss Army Knife. 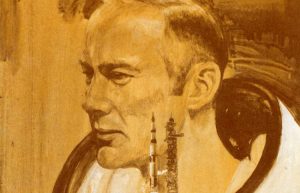 This is Apollo 11. Around this time of year in 1969 they took off to humanity’s first mission to the moon. They had with them all the tools they needed to be successful. Buzz Aldrin even brought along a communion set and celebrated the Lord’s Supper on the Moon. What tools would you need to sustain yourself spiritually for a trip to the moon? What skills would you need to stay in touch with the Divine if you were to spend a whole year on the International Space Station like Scott Kelly did from 2015 until 2016? Going forward this question will only grow bigger: What source of strength do you find in yourself that keeps you sane on a one-way trip to Mars?

For a long time Christians have found it helpful to memorize the Lord’s Prayer. I think of it as the long blade of my spiritual Swiss Army Knife. I can carry it with me wherever I am on life’s journey. It is helpful in many different situations. But then it’s only one piece of equipment among many others that I need in order to make it through the day or all the way to Mars.