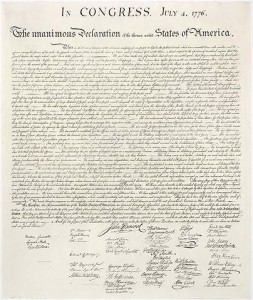 The Fourth of July is often interpreted as a breakup story: Abusive mother Britain hurting her children in the colonies. Eventually the kids hit puberty, become rebellious and as soon as they find the willpower and strength they move out. The Declaration of Independence lists a host of grievances, abuses and usurpations of power. Having listed all the wrongs they had to endure our forefathers “solemnly publish and declare, that these United Colonies are, and of Right ought to be Free and Independent States”

But guess what: Moving out of your parents’ house after graduation does not disconnect you from them emotionally or culturally. They are still relatives. You still relate to them. Case in point “My Country ‘Tis of Thee” still uses the same tune as “God Save the Queen”. You cannot not relate to family. You may become rebellious and cut them off but that only cements the relationship. The Declaration of Independence naturally addresses “our Brittish brethren”.

Israel’s forefathers share a similar story where Abram and Lot go separate ways. Genesis 13 lists a host of grievances, abuses and usurpations of power. Having listed all the wrongs his shepherds had to endure Abram said to Lot, “Separate yourself from me. If you take the left hand, then I will go to the right; or if you take the right hand, then I will go to the left.”

Despite their physical and economic – political if you will – separation Abram and Lot remained together it what the Bible calls “covenant”. The mutual bonds of a covenantal relationship do not go away just because you declare independence and create your own nation. Our forefathers wrote the Declaration of Independence showing “a decent respect to the opinions of mankind requires that they should declare the causes which impel them to the separation.”

The goal of the Declaration of Independence is to remain well connected to the world community: to share reason and power and passion with them, to strengthen the covenant of humanity. Like Abram we are going to be over here on this pasture but we will join the world community in all its major organizations and stay the closest and strongest ally of “our Brittish brethren”. May this 240 year old document continue to inspire us to show “a decent respect to the opinions of mankind”.