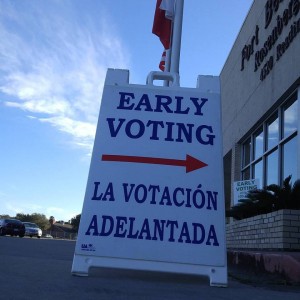 I cast my ballot today and I encourage you to do the same. I have my fair share of experience in politics and policy-making. In college I served as a staffer to a first-term member of the Bundestag who later went on to becoming Germany’s Minister of Economic Cooperation and Development. I ran campaigns and chaired political organizations in different states. Since I was naturalized as an American citizen in 2014 this is my first go-around in primaries of a presidential election cycle in this country.

As a pastor I cannot tell you who to vote for. Like everybody else I have strong opinions about topics and persons. The political arena is competitive. Ideas and personalities are supposed to wash out the best through the process of competition. As a Christian I recognize that Pontius Pilate hit the nail on the head when he asked: “What is wisdom?” – There is not the one “Christian answer” or the best “Christian candidate”. There is not the one wisdom!

The body of Christ is not a political party and it must not act like one. There is no Christian party that is better than another. Christians support and serve in different parties. And members of different parties live together in the church. When I walked into the county annex to vote this morning the first question they asked was: “What party?” – After my response I proceeded to one of the booths. And guess what: Those booths are the same for everybody. There is only one booth for all. Nobody is better here than anybody else.

Church and voting booth have a lot in common after all. God calls us to live responsibly the life we have been given. Part of that responsibility is to take part in the political process. Let your voice be heard and make your vote count.