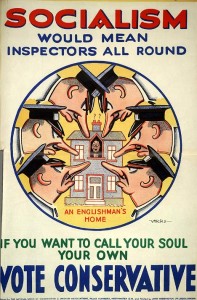 (English poster for the 1929 elections)

Merriam-Webster has picked a word of the year. Actually they did not: they declared 2015 the year of a suffix: -ism.

Since 9/11 the world has been flushed with -isms related to terror-ism. The recent shootings in San Bernardino brought it back to the top of the agenda.

This trend toward -isms gains steam in a presidential election cycle that is fueled by labels: conservatism and liberalism. One candidate gets accused of promoting fascism, another embraces socialism. Pick your label that you like or hate.

In the United Church of Christ we are intentional about exposing and ending the negative labeling of persons: sexism, genderism, ableism, racism. We have consistently stood up for the equal treatment of all God’s children. Whenever a group of people has been singled out via an -ism we have stood right there with them.

“You are those who justify yourselves in the sight of others; but God knows your hearts” (Luke 16:15)
It is so tempting to look at people and judge a book by its cover. We slap labels on people so we can categorize them. That is useful to a certain degree in order to find orientation in the world. But throwing -isms around as a method of judgement is just lazy because it cuts short a deeper exploration of a person or idea. We must acknowledge the sin of -ism. Because when we don’t we are bound to commit it because it is so convenient.