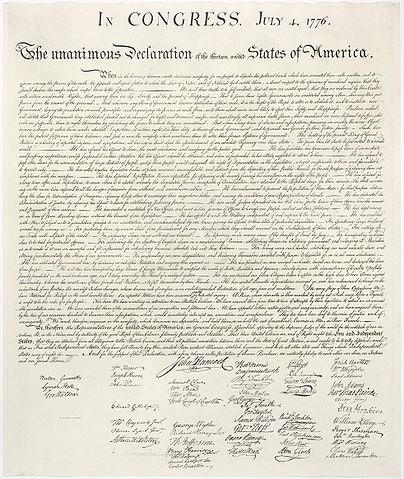 “Human dignity has long been understood in this country to be innate. When the Framers proclaimed in the Declaration of Independence that ‘all men are created equal’ and ‘endowed by their Creator with certain unalienable Rights,’ they referred to a vision of mankind in which all humans are created in the image of God and therefore of inherent worth. That vision is the foundation upon which this Nation was built.”
In his dissent to the Supreme Court Decision to establish marriage equality in the entire United States, Justice Thomas quotes the Declaration of Independence. How, from that quote he comes to opposing equality is beyond me and the majority of the people in this country as well as its Supreme Court Justices.

I have made it my habit to read the Declaration of Independence on the Fourth of July. Usually this old document has something to say that is relevant today:
In 2012 pushing for immigration
In 2014 keeping Texas clean.
In 2015 celebrating marriage equality.

What exactly are those rights again that all men are equally created with?
Life, Liberty and the pursuit of Happiness!

Who are those men that were created equally?
“Men” have been substantially redefined since 1776: The term now is understood to mean women and people of color as well.